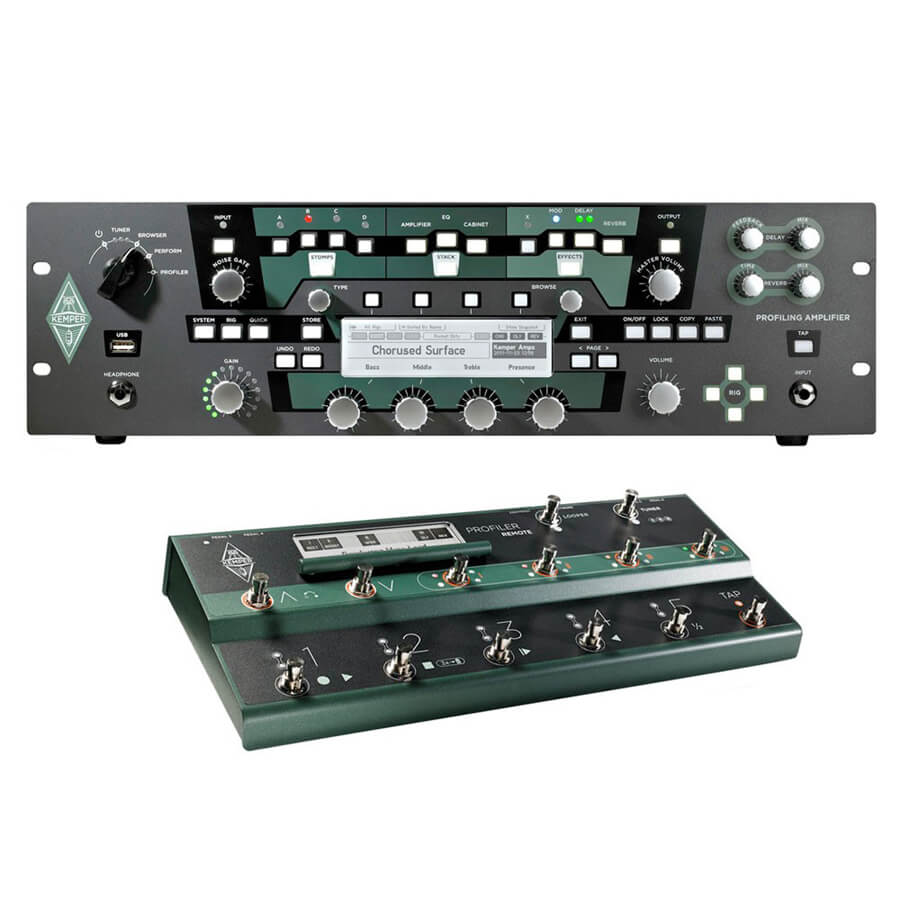 One year after the arrival of the Kemper Profiler concept to the market, it has found its place on all levels guitar players usually operate: at home, in the rehearsal room, the recording studio and on stage, even arenas. Featuring a user interface nearly identical to the lunchbox version, the Kemper Profiler Rack is just as easy to operate. The layout is highly intuitive and already familiar to users of more traditional amps. The most important parameters, such as gain, tonestack and volume, are directly accessible. There are even dedicated knobs to control the reverb and delay from the front panel. This Rack Amp even comes with the Kemper Remote, too!

Any Amp, Anytime, Anywhere
The new Kemper Profiling Amplifier enables you to do what generations of guitar players have been waiting for: to capture the soul of all your amps (and so many more) inside a lunchbox-sized amplifier. So, how does it work- Kemper use cutting edge digital technology to capture the sonic DNA of virtually any guitar amp. The resulting Profiles are as living, vivid and dynamic as the original amps. Imagine you've used some sweet-sounding, well-maintained vintage tube amps in your last studio session. With the Kemper Profiling Amplifier, there's no need to leave those sounds behind anymore. Simply create your own Profiles from these amps and take them with you to use anywhere you like. Variations with alternative amp settings can be created and even the cabinet of a profiled combo amp can be exchanged at any time. Dozens of pro-grade onboard effects and stomp boxes can be used to spice up the Profiles. Kemper even give you Profiles of many exceptional signature amps. Any amp. Any time. Anywhere. They mean it.

The Archive
The Kemper Profiling Amplifier makes it easy for you to share your personal library with other users. It already holds a vast number of rigs. Sharing a profile or rig is as easy as sending an e-mail.

Profiling
Amplifier profiling is a new and unique way to extract the sound and feel of a tube amp and store it away for later use. Profiling doesn't just create a static snapshot; it can give you a deeper control of your sound than your original amp can provide. The response to your playing, dyna- mics and all other details are captured by the profiling process.

The Input Stage
Thanks to a Hi-Z input optimized for passive guitar pickups, the Kemper Profiling Amplifier offers a crystal clear signal path.

The Stack
The Stack section of the Kemper Profiling Amplifier consists of the profiled amplifier, equalizer and cabinet. You can mix and match any amp with any cabinet in your library. You can even creatively change the sonic behaviour of any recently profiled amplifier.

Master FX
The master effects section features reverb, delay and additional slots for stomp boxes to refine your amplifier’s tone. The six knobs on the front panel offer convenient access to the most important settings. The reverb section features a dense and lively reverb algorithm which won’t mask the original signal. The delay section features several tape and stereo delay algorithms which can be synched to MIDI clock.

Amp Controls
The Kemper Profiling Amplifier includes the standard Gain, Bass, Middle, Treble and Presence controls that you would expect from a guitar amplifier. However, in contrast to many vintage amps, Kemper have kept the gain control neutral, so you are able to find the sweet spot of your amp, and run this optimal sound at any gain level.

Imagine if you could change the sonic character of a profile way beyond what's possible with the amp itself. What if you could change the sonic age of the amp, or the bite of the pick- What if you could modify the power supply of your profiled amp in order to benefit from power sagging- The Kemper Profiling Amplifier allows you to dynamically adjust key aspects of your favorite amps which would otherwise be impossible or require hardware modifications. Make it larger than life. You can do anything from minor tweaks, such as making a profile sound a bit more vintage, to more radical changes such as adding some modern high-gain chunk

The Profiling Amp was originally designed to faithfully recreate the sound of a tube amplifier, the corresponding cabinet and the microphone in front of it. For recording or stage PA situations, this is the perfect solution for getting the full guitar amp sound reproduced. But the Profiler still needed a solution for playing through a standard guitar cabinet. The CabDriver feature now allows for doing exactly that! CabDriver retains the tube power amp characteristics and speaker action of the original amp, which is coded in the profile, and translates it perfectly to the speaker cabinet. No additional tweaking of the sounds required!

To get the perfect "amp in the room" sound on stage or in the rehearsal room, simply amplify the signal from the Profilers monitor output with any neutral solid-state power amp into a standard guitar cabinet. And now for the nifty bit: you can run the full profile to the main PA of the venue while simultaneously "cabdriving" your guitar speaker cabinet for monitoring on stage. This makes the Kemper Profiling Amp the perfect all in one sound solution for any guitar player that travels from the rehearsal room to the studio and to the stage.